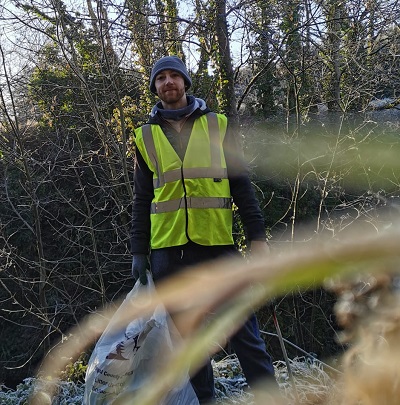 Adam Masterson is a student and volunteer who is passionate about protecting our natural environment.

Just before the pandemic began, Adam had been thinking more about how he could live a more sustainable life and get involved in his community. As restrictions meant he could no longer work as a bartender, he knew this was the perfect opportunity for him to explore this idea some more.

Having looked at the roles that suited his interests, he settled on two which aligned to his passion for sustainability – the Royal Canal Clean Up and Tree Nation. With Tree Nation – a crowd planting platform, he initially began volunteering by spreading the word of their work and impact on social media. They quickly asked him to take on a bigger role and become their Volunteer Manager. Soon Adam was recruiting people all over the world to help share the message of Tree Nation’s planting projects.

With the Royal Canal Clean Up, Adam was able to get out and about two or three times a week cleaning a stretch of the canal between Ashtown and Clonsilla in Dublin. Sometimes he finished with three or four large full bin bags and came across everything from trolleys to couches in the canal! Adam really enjoyed getting out in the peace and quiet of nature and being able to take proactive steps to create positive change in his community.

What really struck Adam the most while volunteering along the canal was how many people stopped to talk to him. People were interested in what he was doing and why he was doing it and took time to thank him for his efforts. Lots of people also asked how they could get involved and he hopes that seeing him along the canal every week inspired other people to volunteer!